An Illustrated History of Jonah Hex

There's this notion called "The 10,000-Hour Rule" that claims if you devote 10 years or 10,000 hours to a given subject, you'll automatically become an expert.  If that's true, then I've inadvertently become a Jonah Hex expert somewhere along the line.  It wasn't intentional, just a side-effect of my obsessive nature.  And while there are others who've put together websites devoted to the bounty hunter (Matching Dragoons and The Jonah Hex Corral being two of the best), I'd never come across one that presented both sides of Jonah's history equally, chronicling both his fictional life and the real-world happenings in the same breath.  So when Jonah moved from his self-titled book to All-Star Western in 2011, I decided to compile an unofficial biography, outlining anything and everything I could find that was relevant (and both of those aforementioned websites have been a great help in this endeavor).

The first part of the project posted on November 1st, 2011, and will continue on a semi-regular basis for as long as there's stuff to write about.  In the time since this project started, it's gotten me some shout-outs, sufficient cred to get cited in articles on Bleeding Cool and Scribd, as well as a couple of "special edition reprints" of the project on other blogs in 2014 and 2016, the latter of which led to the creation of a podcast centered around the bounty hunter.  I'm also working on getting this whole dang thing published.

Due to the insane length of this project (by my estimation, it will be at least 25 parts long, plus an appendix or three), it seemed best to add this index so that the casual reader can easily flip through it.  The links for each available part are below, along with notations on what period of time and/or era it covers (there are also page buttons at the bottom of each post if you want to read it all chronologically).

Hello, and welcome to my blog!  If you were led here by one of the many  "wanted poster" promo cards  we've been plasteri... 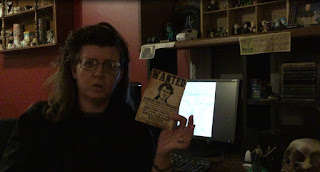 Other Points of Interest

The Back Issue Box

If you need me, here's where you'll find me.

Susan
Send all comments and such to swordsandsixgunsnovel @gmail.com -- I'll get back to you as quick as I can.